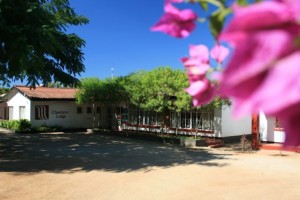 With nearly 800 followers on twitter, regular posts on his Lodge Blog and an active Facebook Fan Page, Richard has embraced social media and leveraged it to make Chanters Lodge the most visible hotel in Livingstone and on the Internet.

For a gentleman who always wanted to be a writer, blogging was the perfect platform. “I blog about Zambia, family, the lodge and anything else that takes my interest. One of the reasons I keep on blogging is because it brings new content onto the site. We’ve re-marketed the hotel through other parts of Zambia through Facebook.”

He continued by saying, “It’s about social interaction. Loads of clients said they check the blog before they arrive and continue reading it after they leave.” [Very true as Chanters Lodge Blog is downloaded into my Google Feed Reader every morning.] His eyes lit up as he recalled the power of twitter, “I can be talking to a llama farmer in Devon [England], a lady in Brooklyn called Cookie talking about what Rihanna’s doing. Twitter reaches further.”

For Zambia Tourism, social media is important now more than ever. In Richard’s opinion, “[Zambia] is over-hoteled and under-marketed.” In addition, visa fees for travelers are increasing and Zimbabwe is slowly regaining a foothold in appealing to more tourists. Zambia has some competition ahead of them. “If you’re not in the top three or four [in your hotel category], you’ll have some bad years ahead of you.”

While this may be a concern for Richard, he doesn’t show it. Chanters Lodge has expanded considerably since it first opened. Current renovations include converting a standard room into a suite with more plans on the way for additional rooms. Updates are posted on his blog regularly. He never stops working.”

Thanks Ben and for the great picture!