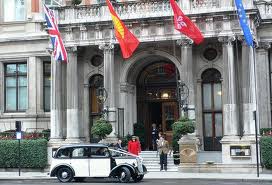 A long, long time ago I did my bar training at the Hyde Park Hotel in Knightsbridge. It is of course now known as the Mandarin Oriental Hyde Park (above) and is home to Dinner Heston Blumenthal’s latest restaurant. So, this piece in Hotel Chatter obviously caught my attention – more especially as my son Jan is the newly appointed Head Chef at The Penny Black restaurant in Fulham Road London, opening next week. We certainly hope his advance bookings are as good as Heston’s!

Heston Blumenthal’s new restaurant Dinner has already been named “best new restaurant in the world” by restaurant critic Giles Coren in The Times. London’s most eagerly awaited restaurant located in the Mandarin Oriental Hyde Park only opened its doors last week but it’s already fully booked until the end of May.

Not surprising as the reviewers and bloggers have wasted no time gushing over the medieval menu which features Meat Fruit – a chicken liver dish shaped like a plastic mandarin, Powdered Duck, Spiced Pigeon and Tipsy Cake, a “spit-roast pineapple” (ooh-err). To see the full menu, head over to the restaurant’s website. Yes, a lot of it sounds pretty gross, but then, so did most of his molecular gastronomy stuff that we tried at the Fat Duck (his flagship restaurant in Bray, Berkshire), and it was nothing less than amazeballs. Plus, there’s always chips for those who like to play it safe.

The Telegraph’s critic rated it 10/10, Londonist agreed with Coren, Time Out gave it four out of five stars, and even the Guardian thought the food was worth paying for.

Which leads us on to the price. Dinner at Dinner isn’t cheap, but it’s not half as bad as we feared. Starters run from £12.50 and most main courses are around the £30 mark. Desserts are from £8, and sides are a ridiculously cheap £4. The wine’s not horrific, either: from £35 a bottle. As we said, not a night out for when the budget’s tight, but the prices are in line with other posh London restaurants. And by way of comparison, the famed 13 course tasting menu at the Fat Duck costs £160 per head.

But there’s an amazing deal if you can’t splash out on dinner: a three course set lunch for just £28. Yup, £28. Available Monday to Friday, 12-2.30pm. There are two choices for each course: lemon salad or “ragoo of pigs’ ears” to start, cured salmon or roast quail for your main, and chocolate wine or orange buttered loaf for dessert.

You need to plan ahead, though. According to the website, Dinner is now booked up until the end of May, and they’ll be opening up reservations for June on 1 March. If you need to get in before then, you can apply to be on the waiting list or, if desperation calls, you can buy other people’s rezzies on eBay. When we checked, the highest price was £62 although one sold last week for just short of £100.