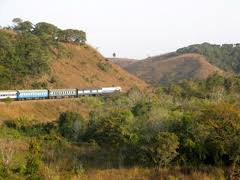 This is good news – we get a surprising number of Guests at Chanters Lodge who have travelled from Tanzania using this service and made their way down to Livingstone to see Victoria Falls.

The Tanzania-Zambia Railway Authority (Tazara) and the Government of China have concluded an agreement identifying 12 new projects with the value of RMB Yuan 270 m (approximately USD42m) to be undertaken under the Protocol of the 15th Economic and Technical Cooperation (15th Protocol). The announcement follows the exchange of letters between the Managing Director of Tazara, Akashambatwa Mbikusita-Lewanika and the Chief Representative of the Economic and Commercial Representation of the People’s Republic of China in Tanzania, Lin Zhiyong.

The new projects, which are aimed at supporting and boosting the operations, include the rehabilitation of 42 passenger coaches and supply of four new mainline locomotives, two shunting locomotives, various rescue and lifting equipment, track trolleys, assorted spare parts and 30,000 pieces of wooden sleepers as well as training of staff on various railway skills and attachment of Chinese railway experts to Tazara over a specified period.

Welcoming the affirmation of the 12 new projects, whose commencement date is soon to be announced, Mbikusita-Lewanika thanked the Chinese Government for the ever-present and tangible support. “Whilst we acknowledge that the support funds under the Protocols are provided as interest free loans to the Tanzanian and Zambian governments, we are grateful to the Government and the People of China for the continuing positive association with Tazara,” he said.

He pointed out that the economic and technical support under the 15 Protocols signed so far is what has kept Tazara going while awaiting the much needed re-capitalisation, reconstruction and restructuring by the shareholding governments of Zambia and Tanzania. “The Protocols are a necessary and critical factor to sustain us in the interim period of the next three years, while the Tanzanian and Zambian governments and other organs of responsibility look for long-lasting solutions required for re-building our operating capacity,” the MD said.

Over the years, Tazara has been receiving regular financial support from the Chinese Government through what are termed as “Protocols of Economic and Technical Co-operation” signed with Tanzania and Zambia in the form of interest free loans, the 14th Protocol having been signed in December 2009, followed by the 15th protocol in March 2012. Out of the last 12 projects undertaken in the 14th Protocol, there are only three outstanding projects which are in the final phase of completion, these being the supply of six new mainline locomotives, rehabilitation of three shunting locomotives and rehabilitation of four gantry cranes.
Once fully executed, the projects of the 14th and 15th Protocols are collectively expected to greatly enhance Tazara’s capacity, doubling the number of locomotives in operation by the year 2015. Currently there are, on average, only 10 mainline locomotives available daily, for mainline activities covering the entire 1860km railway.