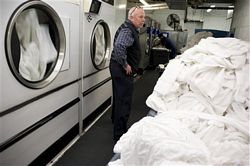 I enjoyed this from thonline

PORTLAND, Ore.
People like to complain: the weather, the economy and that old standby, the boss. But at downtown Portland’s Hotel Monaco things are different. Craig Thompson (above), the general manager of the 221-room property, is rarely in his office enjoying the perks that come with being a big shot. At 60, Thompson hustles like an intern striving to impress. If need be, Thompson checks in guests, parks cars, inspects rooms, hauls bags, delivers room service, works in the laundry and helps make wake-up calls. When guests offer a tip, he politely declines. But if the guest presses a few bucks into his palm, Thompson gives it to his employees, many who have worked with him for years.

He arrived in Portland nearly 20 years ago to be general manager at the Vintage Plaza. Five years into the job, leaders at the Kimpton Hotels chain, which runs Vintage Plaza, asked Thompson to walk a few blocks to 506 SW Washington St. to take control of what is now called the Hotel Monaco, another company property. He has a cluttered and unpretentious office — exposed telephone lines snake out of one wall — in a room behind the front desk. But unless Thompson is making calls, checking something on the computer or finishing paperwork, he’s out helping the bellhop, the clerks, the waiters and anyone else who makes the hotel run smoothly.

“He’s amazing,” said Hannah Sloan, who works the front desk. “I used to be in housekeeping, and he’d step in and clean rooms. The first time I saw him, I was shocked. We’re talking about the general manager.” Thompson has a simple philosophy: “Being a good boss isn’t about writing great reports,” he said. “It’s not about how fast I respond to corporate. It’s not about having a rule book or trying to control everyone. It’s about people. If you understand people, you’ll be a good boss. If you don’t, you may have power, but you’ll never be a great boss.”

He would make a poor candidate for “Undercover Boss,” the TV show that puts bosses to work among their lowest-ranking employees. Thompson is already there. “A good boss works side by side with the employees,” Thompson said. “It keeps me young.” In addition to managing the hotel, Thompson checks in guests, parks cars and helps make wake-up calls, among other tasks. Raydell Denton, the room service manager, says Thompson helps her crew when it’s busy. “You see the head boss here, and it means something,” she says.

Thompson was raised in Spokane and got his start in the hotel business at 16, when he was hired at a local hotel as a busboy, bellhop and room service waiter. He eventually earned a hotel management degree from Washington State University. “My first job was when I was hired for a hotel bar,” he said. “I thought I was going to be the bar manager. I was the bar back. I ended up hauling bags of ice, setting up glasses and mopping the floors at 2 in the morning. I learned the hotel business from the ground up.”