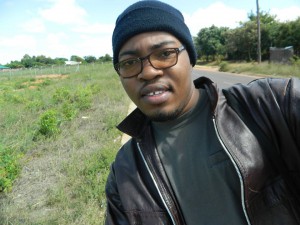 We’re always happy to host enterprising young people as the guest on our weekly show on Livingstone’s leading local radio station Zambezi 94.1 fm – The Chanters Lodge Experience with the Milli Jam Ingredient ft Jay Hillz. So it was on the most recent edition of the programme, when Chola B Chilumba (above) was our guest. Chola told listeners that he’s a student at University of Zambia, just about to start the third year of his degree course in Mass Communications.

Chola had recently spent nine weeks as an intern at Zambezi 94.1 fm as part of his training and he had very much enjoyed the stint. He said that during this time he had learned a lot about himself and had made some really good contacts. The most challenging part of the time spent? Walking miles on foot only to come back without a story and having to face the ‘powers that be’ in the news room with no result! The most interesting case he had covered? The Mayor’s case..”enough said!” We said!

Chola told us that he had been born in Botswana where his father had been a teacher of art. He, his mum and siblings had returned to Livingstone in 2003. He had completed Grade 12 at David Livingstone High School. His parents were now retired and living in the city and they were the ones helping him thru Uni. Chola has a deep interest in photography and videography – partially gained from his dad, and has set up his own Facebook page – ‘Memory Lane Media‘, offering these services to the public for weddings and other such events. He is also busy making a documentary but was reluctant to reveal the content.

The music on the show was good with tracks from Sigala, Galantis, Birdy ft Rhodes, Kygo ft Ella Henderson, Dimitri Jegas, Ellie Goulding and Roberto ft Kaufela. Star of the show was O.C. with ‘Goose Bumps’ a local and excellent track.

Chola himself is into gospel music and his favourite artists are Brandon Heath and Abel Chungu. He is born again and worships at Livingstone Gospel Hall. He has never done the bungee jump in Livingstone and from the sound of it he never would! He supports Barcelona FC. He is still single and denied dating anyone at the moment. Asked where he would like to be and what he would like to be doing ten years’ from now Chola said he would like to be married with a family, a graduate in Mass Communications with his own media company. The company would be focused on making documentaries – ‘The Story Untold’ he said profiling people. He would also like to travel.

We wished him the best of luck and thanked him for appearing on our show.