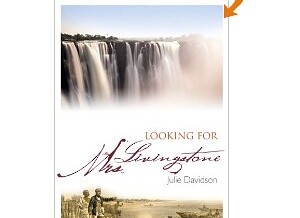 We were delighted to get a recommendation for Chanters Lodge right at the end of this piece from The Herald Scotland which I have shortened a little. The writer is Julie Davidson and the picture shows the front cover of her new book.

They don’t do zebra crossings in Livingstone, they do elephant crossings. You need to know where and when to look, as there are no road markings giving the great beasts right of way, but the local taxi drivers will take you to the junction of their favourite route. Each day, a mile or two from the new Shoprite mall, just after sunrise and just before sunset, the elephants cross the town’s main drag: Mosi-oa-Tunya Road, which is not only its lively commercial hub but the road to the Victoria Falls.

“You mean,” asked a new visitor to Zambia, as a family of five cows and three teenagers sauntered from verge to verge while we crouched behind the bright blue taxi taking pictures, “they don’t stay inside the national park?” Our driver chortled. “The park is not a zoo. They are wild. They go where they want. They go into farmers’ fields and eat the crops. And sometimes they are dangerous. Just last week an elephant was wounded by poachers in Zimbabwe, swam across the Zambezi and killed a woman in a village 20 miles up river from here.”

For all its elite lodges and luxury hotels, Livingstone remains wild at heart. How did the tribal lands of the Toka-Leya and the old colonial settlement of a British land-grab become a celebrated tourist hub and the “adrenalin capital of Africa?” It’s all down to a phenomenal geological fault and the marketing skills of a famous Scot, with a bit of unsolicited help from Robert Mugabe.

Until the late 1990s, the town of Victoria Falls on the Zimbabwean side of David Livingstone’s self-proclaimed “discovery” was the honey pot for visitors. It is much closer to the eponymous cataract (Livingstone is seven miles from the river on a rising hill) and its tourist industry was better organised. But since my own early visits to both I have seen the Zambian town become the beneficiary of Zimbabwe’s political instability, and expand and prosper without losing any of its charm. In fact, its new affluence has saved many of its historic buildings, including the Edwardian clubhouse of Livingstone Golf Club, which re-opened in 2006.

I was back in Livingstone for the bicentenary programme’s academic conference: “Imperial Obsessions: David Livingstone, Africa and world history: a life and legacy reconsidered”. The boy from Blantyre doesn’t only live on in Zambia, he has a global afterlife that is apparently eternal. For three days, European, American and African scholars chewed over papers that ranged in theme from “Livingstone’s dialogue with the rainmaker and the legacy of the Scottish Enlightenment” through “The empire of sentiment: David Livingstone’s 1874 funeral and Africa at the heart of the nation” to “David Livingstone: Prophet or Patron Saint of Empire in Africa?” Not all the speakers were academics; I was there on the back of my book, Looking for Mrs Livingstone, to remind the scholars that the great man had a wife whose contribution to his early journeys is often overlooked.

Closeted in a hotel conference room for three days while the sun shone on the glittering plumes of the Victoria Falls, I was expecting a certain amount of frustration, if not tedium. But by and large it was all stimulating stuff, and when we were released into the brilliant light and sumptuous greenery of the Livingstone suburbs I felt I needed none of the manic attractions of the town’s adventure tourism – bungee jumping, gorge swinging, riverboarding, abseiling, white water rafting, flipping over the falls on a microlight – to improve my mood.

Only the falls could do that. I’ve never felt they needed any of the extreme sporting accessories they have acquired to intensify the exhilaration of their spectacle. I have flown over them in a helicopter and swum in the Devil’s Pool on their very lip, looking into the abyss as it gulps down epic draughts of the Zambezi. (This is something you can do, at a price, from Livingstone Island, but only when the river level drops in the dry season, usually between August and January). But I’ve had my best moments simply walking along the rim of the gorge beside the five mighty cataracts, my insides trembling with their Plutonian thunderclap, daft tears of emotion mingling with gusting douches of rainbow spray.

Different seasons bring different volumes of water over the Falls, but there is no such thing as a wrong time to see them. When the Zambezi is in full flood you get towering columns of spray and boiling cataracts; as the dry season progresses the spray dwindles, the curtain of water parts between the main cataracts to expose the 300ft cliffs, and you get some sense of the geological force which, millennia ago, tore a rift a mile-and-a-half wide in the flat Zambezi valley; and in every season the forest walks on either side take you through storybook Africa, alive with monkeys, baboons and exotic birds.

So once again, with three of my fellow conferees, I negotiated a $10 dollar taxi ride down Mosi-oa-Tunya Road to the Victoria Falls National Park, paid the $20 entrance fee for foreign nationals, saluted the statute of Livingstone, stern and questing, just inside the gate, and set off along the forest path to the incomparable viewpoints. Sure feet were needed on the rough stone steps and slippery earth; the Falls were full and it was the first time I’d crossed Knife-Edge Bridge in spray so dense the figures ahead of me slipped in and out of view.

Then a wonderful thing happened. This scary footbridge, maybe 200ft high and 100ft long, is a link across a vast bowl of emerald bush on the edge of the cauldron. As I slithered along, holding tight to the handrails, the spray was cleared by a persistent eddy of wind, the sun flooded the steep slopes of the bowl and a rainbow arched over the forest. As I paused to look, a lone swallow pierced the spectrum, darting in and out, swooping and soaring until it had climbed over the rainbow.

There are no direct flights from Europe into Livingstone but it is easily reached from South Africa and, as of this month, from Kenya, with connecting flights from the UK. British Airways (ba.com) and South African airways (flysaa.com) have daily flights via Johannesburg, while Kenya Airways (kenya-airways.com) has opened a new route three times weekly via Nairobi.

Where to stay Livingstone and its environs cater for everyone from penny-pinching backpackers to well-heeled retirees. At the top end are exclusive, all-inclusive riverfront lodges like Tongabezi, the River Club and Stanley Safari Lodge, or the five-star Royal Livingstone Hotel, with its enviable site beside the Falls; in the middle is a range of three-star hotels and private guest houses; at the budget end are clean if boisterous hostels like Fawlty Towers and Jollyboys Backpackers. And then there is Chanter’s Lodge, which on my last visit became home for five days without stretching my wallet. Check it out: chanters-livingstone.com.