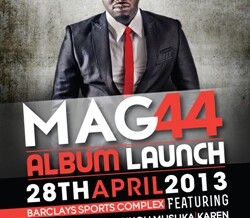 Thanks to George ‘Kaufela’, co presenter of our weekly Sunday night radio show for this piece about Mag44 Zambia’s latest hot property!

“He’s been known for his killer beats, creative direction, knockout punchlines and minister of the gospel, a Gospel Activist. Prior to his conversion, Magnus “Magnum44” Mando, was an upcoming hip-hop artist with a love of crazy word play, but after his conversion he’s been known mostly for his crazy productions.

The 27 year old sensational hip-hop gospel singer Mag 44 has released a new single entitled ‘Shipikisha Club’ which is currently receiving airplay and is in most of the radio charts across the nation (including the Zed Hot 10 Countdown which I host every Saturday afternoon on Zambezi 107.7 fm.) The track has been received with mixed feelings – fans and most critics say that the gospel hip-hop singer/rapper in his new song speaks strongly against marriage. Others feel he hit the nail on the head by calling it like it is – agreeing that marriage takes a lot of relentless effort, patience, understand and commitment, among other things, for it to work. Those that lack these qualities perish, breakup or divorce within their first years, hence the title ‘Shipikisha Club’.

This is not the first time this gospel rapper has received such criticism – earlier this year he released a song which featured local female, heavy weight boxing champion Esther Phiri entitled ‘Me I Beat’ on the chorus. I guess controversy also works in the gospel circles!

I must also mention that Mag 44 played a major role in the production of Pompi’s latest album. Production wise he has worked on ‘Chikondi’ for Tio, ‘Bana Ba Kwa Lesa’ and ‘I Gat Game’ for Mandiva, as well as ‘Nyamula Manja’ for Gospel Activist plus many more, too many to mention. However, very few people knew this Zambian producer was as gifted as he is on the MIC!