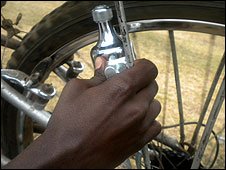 After the story of the ‘Boy Who Harnassed The Wind’ in Malawi, here’s another story of enterprising young Africans being innovative. Again from the BBC:

Two Kenyan students are hoping to market a device that allows bicycle riders to charge their mobile phones. Jeremiah Murimi, 24, and Pascal Katana, 22, said they wanted their dynamo-powered “smart charger” to help people without electricity in rural areas. “We both come from villages and we know the problems,” Mr Murimi told the BBC. People have to travel great distances to shops where they are charged $2 a time to power their phone, usuall yfrom a car battery or solar panel.

“The device is so small you can put it in your pocket with your phone while you are on your bike,” said Mr Murimi. It is estimated that some 17.5 million people out of Kenya’s 38.5 million population own a mobile handset – up from 200,000 in 2000. Although similar devices already exist in other countries, they are not available in Kenya. The two electrical engineering students from Nairobi University have been working on their own invention, which they are selling for 350 Kenyan shillings ($4.50) each, over the last few months during their university break.

In Kenya, bicycles are sold with a dynamo to be attached to the back wheel to power the lights. The dynamo lead can be switched to plug into the charger instead, they explained. Mr Katana explained it takes an hour of pedalling to fully charge a phone, about the same time it would if it were plugged into the mains electricity. The BBC’s Ruth Nesoba says after a short ride, the phone’s battery display indicated that it was charging.

Great stuff and good exercise too!