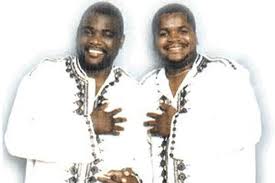 George Da Soulchild, co-host and technical expert on The Chanters Lodge Experience, our regular Sunday night radio show on 107.7 fm in Livingstone, updates us on the latest news from the local music scene.

Sakala Brothers Still Going Strong
The Sakala Brothers (pictured above) have been invited to perform at an international music festival in Poland. In a statement released to the press, Moses Sakala mentioned that the duo and their band were invited by the European Centre for Music Festival, to be held in the Polish city of Lodz. He said the festival would run for two weeks.

“This is a great honour for Zambia. We’ve been rehearsing at our Sakala Brothers Arts Centre at the Lusaka Playhouse, and we appeal for prayers from the people of Zambia as we undertake another mission as cultural ambassadors from our beloved Zambia”. Moses, whose band gets a second invitation to Poland this year, said.

“In May, we delivered an award-winning performance at the Sacred Music Festival Gaude Mater in Czestochowa in Poland. The award recognised the Sakala Brothers as one of the top performers during the last 20 years of this festival,” he said. The team travelling to Europe also includes Baron Besa (guitar), Sam Zulu (drums) from the Airpower Band, Lawrence Banda (keyboards) and Samson Mwiche Silwimba (bass guitar).

Petersen Demands K350m From Zain
Zambian singer/ragga artist Petersen has demanded ZK350 million in damages from mobile service provider Zain (now Airtel) for the alleged illegal download of his song ‘Stoga’. According to a letter addressed to Airtel management, the K350 million should be paid within seven days, failure to which legal action would be instituted. Zambia Association of Musicians legal advisor Tresford Chali stated that the action by Zain to make the song available on their network without approval is contrary to the Copyright and Performance Act Chapter 06 of the Laws of Zambia and is therefore breaking the law.

Mukubesa Mundia aka Petersen also stated that once legal actions commenced, he would seek a court injunction restraining Zain from making the song available for its clients to download. ‘Stogas’ is Petersen’s latest satirical offering, receiving mixed reviews from local music enthusiasts.