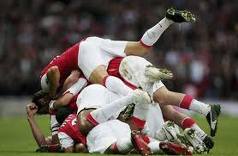 Arsene Wenger hailed Arsenal’s performance in their 2-1 Champions League victory over Barcelona and labelled the occasion a “special night”. The Gunners went a goal down at the Emirates Stadium after David Villa swooped in the first half but staged a stirring comeback thanks to late strikes by Robin van Persie and Andrei Arshavin.

It was the first time Arsenal have beaten the Catalan giants and puts them in a great position to qualify for the quarter-finals of the competition. But Wenger remained cautious with the second leg on the horizon in three weeks’ time, especially considering Arsenal’s 4-1 second-leg defeat at the Nou Camp last season which saw them exit the competition.

“I am highly delighted. It was a special football night,” said Wenger. “The game promised a lot and fulfilled that promise. It was two exceptional teams who tried always to be positive. “We are not favourites now, but what is important is the belief that we have a chance. “Barcelona are still favourites. We know now that we can beat them, though. We did not know that last year.

“Tonight gives us a chance to to go to Barcelona with belief. Every game is difficult but we will prepare well and be highly focused.