Meet Elena Gomez and Joyce Kanimba, (above) representatives from Kubuka NGO in Livingstone, and guests on the most recent edition of the Chanters Lodge Experience with the Milli Jam Ingredient featuring Jay Hillz. ‘The Experience’ is our weekly radio show airing from 20.30 hrs CAT on Zambezi 94.1 fm, Livingstone’s leading local radio station. We often feature guests staying at the lodge, sometimes members of staff but often local Livingstone personalities such as Elena and Joyce.

The ladies told listeners that ‘kubuka’ in the Tonga language means ‘waking up’. Milli Jam decided he would address Elena by her Tonga name ‘Mutinta’ throughout the show, meaning ‘first of a kind’ – apparently! Kubuka NGO is a non-profit organisation created to guide the most vulnerable communities in Zambia on their journey to sustainable development. Elena, one of a group of five Spanish young people involved in the NGO has been coming back to Zambia every year since she first landed in Livingstone when she was just 18 years old. She is now a qualified doctor from Madrid University and is back in Zambia until April taking the affairs of Kubuka one stage further. Joyce is Kubuka’s permanent representative in Livingstone and hails from a teaching background.

The NGO works with local people as one. They are working in Maramba and Mwandi communities in Livingstone. They have a programme to sponsor 60 children from the Mwandi community. They give workshops to young teenagers to improve their knowledge on health, sex, business and other useful topics. They are working with a home based care group in Maramba, creating a farm that can generate income to be able to give back to the community by buying medication for HIV patients, and building a cultural centre to give talks and providing a library for youths.

The music on the show was right up to standard. We opened with smash hits from Fergie and Karen Harding. Milli Jam and Jay chose ‘Jovial’ a brand new and great track from Zambia’s own Chilu Lemba, as well as others from Fall Out Boy, The Weekend and Zambia’s Salma Dodia ft Cactus. Our pick of the week was former ‘Experience’ host Kaufela’s latest ‘For You’. Our oldie of the week was by TLC and the prize we give of a dinner for two to the first person to text us the name of the artist on the track was snapped up by Mwiinga.

Joyce told us that she was very married with a large family and that her favourite music was gospel. Elena is single. “Spoken for?” Asked Milli Jam. Pause. “Errrr…..no” the reply. We jumped! “That was very hesitant” I said. “Just imagine!” Said Milli Jam but we were unable to prise out any more detail in this regard. Elena is a fan of Real Madrid and her favourite player is Casillas. “A goalkeeper?” Queried Milli Jam. “I bet it’s not about football” I said and our Guest blushed and laughed! She likes all kinds of music but her favourite artist is Despatch.

Chanters Lodge recently donated another solar lighting kit to a village primary school in Southern Province of Zambia. There’s a photo above and the acknowledgement below:

Greetings, I wish to acknowledge with great appreciation the purchase of a solar kit that was donated to Natebe Primary School courtesy of your Lodge. Stay blessed 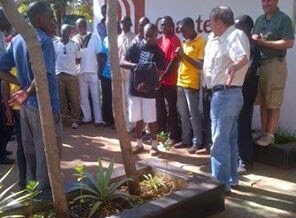 We were delighted to welcome 35 students from the Christian Leadership Development Programme in association with George Benson Christian College, Kalomo, Southern Zambia for a free lunch at the lodge today, as part of their familiarization tour of Victoria Falls. For some of these young Zambian people it was their first ever view of Zambia’s very own natural wonder of the world. Organizers – Zambia Mission.

They were such happy and appreciative young people. The picture shows them singing their thanks for the food.

I’m front right in the picture and just behind me is Greg Swindle, the organizer.

It was a great day for the lodge!

We were delighted to welcome Mariann and Gary Barker (above) as Guests on the most recent edition of the Chanters Lodge Experience with the Milli Jam Ingredient featuring Jay Hillz – our weekly radio show on Livingstone’s local radio station Zambezi 107.7fm. Mariann and Gary told our listeners that they were staying at Chanters Lodge for the weekend to celebrate their 48th wedding anniversary. “How did you meet?” We wanted to know, and Gary explained that they had been together at high school in California, their home state in USA. “So you were high school sweethearts?” I surmised. “No!” They said “We met up again later after high school when we both went to the same college and that’s when we started dating”. “Awwwww!” We said and congratulated them on their anniversary thanking them for choosing Chanters Lodge for their celebration.

Pastor Gary, to give him his correct title, told listeners that he and Mariann live in Choma in the Southern Province of Zambia and are the founders of Grace Baptist Church located in the showgrounds at Choma. Gary also teaches at, and operates, the Baptist Bible College and Institute of Choma where pastors are trained on a four year programme. The current number on training is seven. The couple have lived in Choma for seven years and Gary has been a pastor for some 33 years. The mission was founded in 1930 and has about 1200 missionaries worldwide. The missions are funded largely by individual donations leading to great interaction between the missionaries and the donors, and Gary told us that Mariann does a great job in sending photos and other information about their work in Choma back to donors in USA. “They love to see that lives are being changed in Zambia!” Said Mariann.

The music on the show was far from classical or gospel, this couple’s stated preference. We opened as usual with ‘Hey Brother’ from Avicii before dropping tracks from 5 Seconds Of Summer and Gorgon City. Jay and Milli Jam gave us numbers from Brinky ft Kantu, Casper Nyovest, Ne-Yo, Slap Dee and 2 Pac. No-one won the prize of a dinner for two with drinks at the lodge we offer each week on the show to a listener who can answer a simple question. Gary revealed that wife Mariann had been a brilliant drummer in her youth!

Mariann told us that the couple have three grown up children, four grandchildren and two great grand children back in the USA and that they miss them a lot! They were happy that Bart, their son, a policeman in California operating with a police dog, had been able to visit them in Zambia earlier this year with his family. The family had loved all the tourist activities they had been able to do at that time, including the one day safari to Chobe, the lion encounter and the microlight flight. Mariann had drawn the line at any member of the family being allowed to do the bungee jump! They also revealed that they were friends with Jo Brooks, proprietor of the Livingstone Crocodile Park although Mariann does not like going there! Gary revealed that Jo had told him ‘plenty of stories’! We moved on unsurprised – Jo was a Guest on our show a while ago so we could just imagine!

This was a nice letter received from the Anglican Church in Livingstone, and there’s a photo of the donation being made!

I hereby write to acknowledge receipt with great appreciation of the Solar Charging and Lighting
Kit that you bought and donated to through Mr. Mwamba one of the trainees that was trained by
us under the Lights For Learning Trainer of Trainers Solar Project.

We are happy to inform you that the above stated kit was on Friday 6th June 2014 donated to Lugwalo Basic School which is about 300 kms from Livingstone. The donation was greatly
appreciated by the school and they will independently write to you and acknowledge receipt of the same.
Thanks for partnering with us in making a difference in the community. We pray that God richly

blesses you and your business.