Once again it’s our pleasure to introduce you to Norwegian guests staying at Chanters Lodge. Meet from left to right Erna Ravn, Silje Helland and Line Mannerud who featured last Sunday on our radio show – The Chanters Lodge Experience with the Milli Jam Ingredient featuring George da Soulchild. The show goes out between 20.30 and 21.30 hrs every Sunday night on Zambezi Radio 107.7fm, Livingstone’s most popular local radio station. We feature music and conversation in just about equal proportions, chart news from around the world and the latest from Lodgeblog, as well as giving away a weekly prize of dinner for two at Chanters to the first person to text us the answer to a deliberately simple question. This week we asked which country our guests hailed from and towards the end of the show Joyce quickly answered ‘Norway’ and won!

Erna, Silje and Line are 3rd year students at the University of Tromso in chilly Northern Norway, studying teaching and currently in Zambia for a month to complete their course practicals at Nansanzu Basic School in Livingstone. The girls will be educating Grade 8 pupils in history, home economics and maths respectively. They were due to start teaching on the Monday following the show having completed a week’s acclimatization, and we weren’t sure whether they were more nervous about starting work or appearing on radio! Mind you Line seemed nervous about nothing! The girls said they were staying at Chanters following a recommendation from fellow students who had stayed with us last year. We liked that!

“How long have you been in Livingstone?” Milli Jam wanted to know. The girls replied that they’d been in town just over a week. “What activities have you done?” He carried on, and here began the partial tale of woe! The girls told listeners they’d been for an elephant safari on Saturday morning and whilst they’d had a good time, as they were dismounting Line fell off the beast and cut her leg. On Friday evening they’d taken a sunset cruise and Erna had been stung by a wasp – her wrist was still sore and swollen as the show went on air. The girls said “these things go in threes, we’re waiting for something to happen to Silje”! We hoped not! “Had they been clubbing already?” They were asked. “Not yet” they replied expectantly… “but we’ve flown microlights over Victoria Falls and seen the Falls from the ground as well, getting very wet in the process.”

The music on the show was great. We opened with Enrique’s latest smash featuring Ludacris and DJ Frank E ‘Tonight I’m Loving You’ back to back with Jennifer Hudson’s ‘Where You At?’ Our Zambian tracks were Zeck Dizzy with ‘Danger’ coupled with T-Sean’s ‘Wonder Why’. Ne-Yo’s ‘One In A Million’ and Keysha Cole’s ‘I Ain’t Thru’ featuring Nicki Minaj went down well and so too did Christina Perri’s ‘Jar Of Hearts’. We asked the girls which band was ‘hot’ in Norway at the moment (as if you could be – lol!) and they told us Kvelertak. “You be careful” said Line “this is dark rock”! We promised we would be!

Inevitably Milli Jam and George wanted to know if the girls had boyfriends pining for them back in Norway. Erna had, Silje and Line hadn’t. “Where would you like to be and what would you like to be doing ten years from now?” We asked these three lovely, lively ladies. Erna wanted to be married to her boyfriend and teaching in Norway. The much travelled Line still wanted to be travelling and quite fancied teaching in Zambia. Silje wanted to be at home with 40 cats listening to classical music! (Yes 40!)

Amidst studio discussion about Arsenal’s 2nd half debacle the previous Saturday afternoon and Manchester United’s first league loss the same day, together with Liverpool beating Chelsea (Torres and all) that evening, the girls admitted they didn’t follow football but just loved skiing, though they supposed people in Zambia didn’t ski much! We confirmed that……..

Were the girls happy at Chanters? Milli Jam wanted to know. They were and just loved the Chanters Girls!

Meet, from left to right in the above photo, Eirin, Zlata and Turid, three of the five Norwegian student teachers currently staying at Chanters Lodge, Livingstone while they gain teacher experience at Rainbow School just across the road from Chanters. The girls were guesting on The Chanters Lodge Experience with the Milli Jam Ingredient featuring George The Soulchild last Sunday. The show airs every Sunday on Zambezi Radio
107.7 fm, live from 20.30 – 21.30 hrs and features music and chat.

Having only been in Zambia for a week the girls were worried about speaking in English on the show and to add to their concern none of them had ever been on radio before! They had no need to be nervous, they were very happy and funny and there was a great audience response. How do I know? Well, every Sunday we give away a dinner for 2 at Chanters Lodge for the first person to text us the answer to a simple question – in this case which country did our Guests hail from. I judge the audience response from the number of text messages we get answering the question, and on this show there were plenty! Was Zambia what the girls had expected? They hadn’t known what to expect!

“What grades are you teaching”? Milli Jam asked the girls, and they explained that they were teaching pre-school. Little ones. “Is there a big difference between teaching methods in Norway and here” I wanted to know, and the girls commented that in Norway there was much more play teaching than here where the pre-school was more serious. Which was the better method? A combination would be best the girls agreed. They told listeners they were teaching in the mornings, and in the afternoons were enjoying the sun by the pool at Chanters Lodge. Had they had time to do any of the wide range of activities available for visitors to Livingstone? The girls informed us that they’d just spent two days and one night in Chobe National Park. Had they seen lots of animals – they had – and loads of insects as well! “Were you scared”? I wanted to know. “Of the insects, yes”! They shrieked, and then roared with laughter!

“Have you got boyfriends back in Norway”? Milli Jam and George inevitably asked fairly early on in the show. Eirina and Turid had, Zlata had not. “Zlata” I pointed out enquiringly “you don’t sound Norwegian”. Zlata explained that she was in fact Russian, although she’d lived in Norway for about 10 years. “I think I’d like to learn Russian” George said quickly!!

The girls enjoyed the music on the show. As usual we opened with Candy by Aggro Santos then this week followed up quickly with ‘S&M’ by Rihanna (sticks and stones may break my bones but chains and whips excite me!) And Nelly’s ‘Just A Dream’. The two Zambian tracks George chose this week were ‘Naya’ by Judy (meaning ‘I’m leaving’) and ‘Wilala’ by Masi. (‘Don’t sleep before you resolve the problem’). Milli Jam selected Soulja Boy’s massive hit ‘Kiss Me Thru The Phone’ and Bow-Wow featuring Chris Brown with ‘Ain’t Thinking About You’. We also played ‘Happiness’ by Alexis Jordan and Rihanna’s ‘Love The Way You Lie (Part 2).

The guys wanted to know if the girls had been dancing at any of Livingstone’s night clubs and yes they had, the first weekend they were in town. Milli Jam quickly followed up with an invitation for them to visit Steprite, the club he manages in Livingstone when he’s not being a DJ on 107.7 fm. This coming weekend the girls intend to visit Victoria Falls which they haven’t yet seen.

Were they missing home? Yes, but not the -15C temperatures, or for that matter the dark days when the sun barely makes it over the horizon in Northern Norway. Pretty, intelligent, talkative and happy, these Nordic lasses were great Guests on the Chanters Lodge Experience.

We had this lovely email from recent Guests at Chanters Lodge, Livingstone

Here are a few pictures from the excellent bike tour that Lawrence Zulu took us on last month. Lawrence was a wonderful guide and showed us places we would have never gotten to. It was definitely a highlight of our time in Africa.

Hope all is well and that the Norwegians are doing well with their teaching. We had to adjust to the minus 30 degree wind chill when returning to Canada. We are so happy we made the trip.

Apart from the “minus 30 degree wind chill” bit, isn’t that cute!? And aren’t those great pictures of Maramba Market? 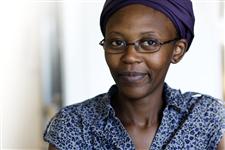 There’s lots of news about Zambians in line for international awards this weekend which is great! Here’s about the StatoilHydro art award in Norway and our nominee from Livingstone Anawana Haloba!

The StatoilHydro art award is a biennial award, the purpose of which is to stimulate and recognise talented young artists working in Norway (or Norwegian citizens working abroad) and enable them to develop their art. Worth NOK 500,000 (EUR 58,000 / USD 83,000) it is the largest art award in Norway.

Anawana Haloba (born 1978 in Livingstone, Zambia) works primarily with sound, video and installations. She studied at the Evelyn Hone College of Applied Arts and Commerce in Lusaka, Zambia, the National Academy of Fine Arts in Oslo, Norway and the Rijksakademie van Beeldende Kunsten in Amsterdam, the Netherlands. She has exhibited in Oslo, Dakar, Venice, Sydney and Lusaka.

We wish her all the very best!