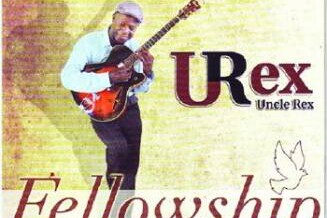 Thanks to George Mukwita for this breaking news!

Veteran guitarist, Rex Mukubonda, fondly known as Uncle Rex has released his fourth guitar album titled Fellowship. Best known for contemporary jazz and reggae fusion, Mukubonda has this time composed an all-gospel collection with Sadra Kapapa on vocals. Fellowship was recorded live in Lusaka and was mastered in California by Ken Lee.

Among tracks on the album are Jerusalem, What a friend, Hosanna, Tulemitotela, I surrender, Halleluya and Rock of ages. The album was sound engineered by Andrew Diamond and Sebstian Mutale, and features Mutamula Mwale on drums, Jones Samalama on keyboards, with Ken Schick and John Makasa on saxophone.

Uncle Rex is arguably one of the best guitarists in Zambia.The 14 track project is available in all Sounds outlets and on I-tunes. Every Thursday, Uncle Rex and his band entertain a largely mature but responsive audience to a selection of cover versions at O’Hagan’s Pub and R
estaurant in Lusaka.