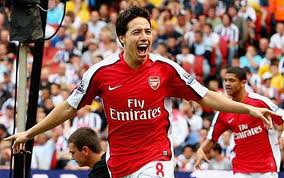 As Arsenal rather luckily sit on top of the English Premier League this morning, the undoubted star of yesterday’s scrappy win over London rivals Fulham was Samir Nasri pictured above. This from Yahoo Sport:

“Arsene Wenger declared there was even more to come from Samir Nasri after the midfielder’s magical brace sent Arsenal top of the Barclays Premier League. France star Nasri showed jaw-dropping composure to prevent his side dropping yet more points at the Emirates Stadium as the Gunners beat Fulham 2-1.

Both goals – his 10th and 11th of the season – were fit to win any game and manager Wenger was delighted with the midfielder. “It was a combination of touch, intelligence, special talent and calmness as well,” he said. “He needed to be patient to finish on both occasions and he did that very well.

“I’m happy because he had a game that was, at the start, only based on coming to the ball. But now he has more variation in his game: turns, runs in behind without the ball, and as well coming to the ball and taking it to his feet. So his game is improving and he is, of course, more efficient.”

Wenger added: “Many people questioned me when I took him here but he is showing that he is an exceptional talent and I think there is more to come from him.”