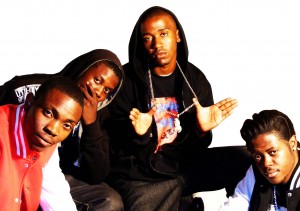 Wow! George da Soulchild is busy this week with guest blogs! I love it! This piece caught my eye as I’m on Twitter with at least one of Zone Fam. Wishing them all the best! The interview is courtesy of Zamtunes.com

Zambian hip-hop collective, Zone Fam continue to be one of the most prolific rap groups in the country since it was formed in 2007. The founders of the group, The Holstar and Pope have successfully managed to turn the group around from a group of young guys jamming at Zone Studios, to a family of talented individuals who bring together their skills into a great musical synergy. The name Zone Fam was derived from the studio name, when one of the original members, Al Kani said the line “You can’t mess with the Zone Fam” in an old track.

The original Zone Fam members were The Holstar, Pope and Al Kani and thereafter, Dope G joined, followed by Jay Rox, Verbal Assasin and Last Thugga. They describe their music as “good Hip Hop period!” They fuse both English and local languages into their lyrics to make it more appealing to the general public.

We caught up with the members of Zone Fam to find out more about their music, the Zambian scene, their future plans and more.

Q. How long has the group been together and how did the group start?
“We have been together for 3 years now. We all started off as solo artists with one producer and eventually became a group of six with a slew of producers.”

Q. When did the group have its major breakthrough?
“Early in 2010 we released a single and video for “Pop Dat Body”, which was well received by our fans. We have over 5000 views on YouTube alone and it still stands as one of our biggest hits. As a group we have one mixtape together, “The Full Script” released in 2010. It was entirely produced by Nigerian Teck-Zilla of Str8 Buttah. As solo artists we have several mixtapes and albums – some are available on our website www.sdrtv.com“

Q. What have been some of your highlights as a group?
Our highlights include performing on the same stage as Brick and Lace when they came to Zambia and the everyday love and support we get from our fans.

Q. How has Zambia received your music on the whole?
We have been well received with two videos in rotation on our local broadcaster and our single “Mabhodlela” from the forthcoming album in heavy rotation. We are set to release more singles as the album release draws near. We have our fans to thank for everything.

Q. What should Zambia and Africa expect from the group?
Currently, we are working on our album to be released this year 2011 and several videos that will accompany the album. We are planning to get our name our across Africa and the globe so they can see what we have to offer. So people should look forward to big things this, an album that you have to get your hands on, beautiful music videos, lots of innovation and immaculate lyricism; something different.